Pop culture that took off in 1950 kept on growing for an entire decade. While 1951 came with changing styles and trendy music, 1952 was full of surprises. From the ever-growing television industry to Albert Einstein refusing the leadership of Israel, a lot of events happened that year. Also, advancement in medicine and the war field was observed.

Here is the summary of some major events that took place in the year 1952: 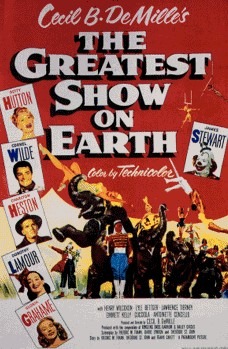 Directed by Cecil DeMille, this drama movie was one of the best films of the decade. The plot featuring the cold-war of power and love keeps the viewers at the edge of their seats at all times.

It is based on a road circus that is dealt with by an arrogant manager. This manager is named Brad, around whom the entire story revolves. How he manages the circus, and how he lost everything due to a horrible accident, is portrayed through this amazing film.

It represents that no matter how much you love a person, there is a limit for anyone’s patience. From Brad not accepting his love for his girlfriend to him crying for support, the story describes how arrogance can sometimes leave a person empty-handed.

For a film industry that was in its growing stages, this film was a complete blessing. It won two academy awards for best picture and best story and was nominated for more. Even after decades, this movie has a certain fan base that does not seem to decrease any time soon. This comedy romance movie was directed in the guidance of John Kelly. Through this film, he has described the old-fashioned cinema industry that once used to be silent. In the starting days, actors didn’t use dialogues to converse; instead, they used to convey their messages through facial expressions. As beautiful as that time was, soon, that industry was closed.

With the introduction of talking characters in the industry, silent actors and the entire setup had to go through a huge phase of transformation. And, this process of transformation is wonderfully expressed in Singin’ in the Rain.

The movie was not only famous in its time but also received massive appreciation long after it got released. This movie is one of the 25 films that are preserved by the United States in the national film registry. According to them, this film is culturally and historically important for the country. For the first time, a ‘don’t walk sign’ was installed in New York City. Before that, there weren’t many rules for pedestrians. The traffic guards used to take hold of situations, but accidents and certain mishaps were common.

With the introduction of this little piece of technology, a lot of things were improved. It controlled traffic, and a great reduction was seen in road accidents.

Fun fact, this sign did not have an apostrophe between the letters n and t of don’t, because this implied that the message was urgent. Meaning, the commander has not enough time to do grammar correction. Though you won’t see that now as it was later changed, and another design was proposed.

Although it looks like a common piece of craft, roll-on deodorant was designed with a lot of attention. It took years for the company to make a design that they were satisfied with. Also, it was a challenge to market this product as it was one of its kind.

Moreover, there weren’t any means of media and massive advertisement. Nonetheless, this invention proved to be one of the highlights of 1952. It was branded by the name Ban Roll-on, and it got popular pretty quickly.

For the first time, open-heart surgery was performed with external heart support in the United States. It was developed by Dr. Forest Dodrill and was used on Henry Optik. The patient had weak lungs, and to avoid shortness of breath; the machine was used.

It was a successful trial, and the surgery was carried out with little to no complication. For scientists that were working day and night to produce a mechanical heart, this trial was a breakthrough.

As opposed to the tight waistline style of 1951, 1952 was all about inclusiveness. People decided what to wear – be it the regular high-waist style or baggy sacks with no prominence of their waists.

The brands used a similar tactic. While some offered fitting dressings, others launched loose attire, with sometimes addition of a belt to extenuate the waistline. All in all, there was no specific trend that everyone followed. Instead, they wore what they liked the best.

Knee-length gowns were the fashion staple of this year. Women used to wear dresses that would fit with a belt on the waist; after that, it blew up like a ball gown and ended midway on the knees.

Usually, housewives were observed in this attire. But this design also made it to the spotlight of many runway shows.

This year, stoles were a big thing. From wearing them as headbands to scarfs, there were a lot of uses of a simple piece of fabric. There wasn’t much jewelry, so women used to wear flowers as headpieces on their buns.

It was a time of sleek and put together hairstyles, so the addition of flowers or stole elevated the look altogether.

The famous British television drama arrow to the heart was released in 1952. It revolved around the World War and its effects. Based on a German novel, it represents how people coped up during the war.

It was aired on the BBC and instantly caught attention. This drama was so appreciated that it got repeated over and over again several times. And even after that, it remained one of the top drama serials British TV ever featured. The famous American television show, Claudia, was aired for the first time on NBC. It featured short comedy stories inspired by novels and other literature. The series revolved around a girl named Claudia and her life.

This show has beautifully portrayed the struggles that Claudia faces to fit in a married lifestyle. Given that her age was only 18 years, how she creates Balance between her youth and responsibilities is amazingly displayed in the program. The all-time famous The Today Show first debuted in the year 1952. And, with 68 years on the screen, this program is now one of the oldest TV shows. It was planned and structured by the NBC team, and even though it has changed quite a lot now, the idea is still the same.

It covers all the essential information of the day. Provides important news and daily updates, just like a newspaper. Though it seems regular now, it was a pretty big deal at that time.

The radio show of popular characters Ozzie and Harriet first appeared on the screen. They featured the Nelson family and other important roles too. Because it had a history of radio already, this program took off fast. It aired for about 15 years and had a huge fan base.

Fun fact: when the crew was asked to make a TV show, the cast agreed only after signing a contract of at least ten years. It is supposed that they were afraid of getting much attention on the screen, but they were wrong. As Ozzie continues to entertain kids of all ages, we can surely say that this show is one of the most popular ones in the history of American television. In 1952, ice dancing was included in the figure skating championship league. This way, it was considered a separate sport than figure skating that mostly focuses on the prints produced by skaters. On the other hand, ice dancing is all about the moves and poise of the dancers.

When it was introduced, it caught the attention of a lot of aspirants. Now, it is one of the most famous ice sports. The 15th Summer Olympics were arranged in Helsinki, Finland. Nearly 69 countries participated in different categories. It had 149 events and about 5000 athletes participating in their fields of interest.

But the real truth behind this season’s popularity is that it involved women for the first time. Before that, women participating in sports was considered a taboo. But this year, all the conservative rules were broken, and a true spirit of sportsmanship was seen with no discrimination over gender. Before 1952, the concept of hydrogen was only a fantasy. But then this year, the first trial was performed in the USA. Although it wasn’t the best, still its marks can be seen to this day. It was 1000 times more powerful than an atomic bomb and easily declared the country as an untouchable place.

Not only did it destroy the land, but left it no good for vegetation, or any life, in general. This event happened in November and is marked as one of the most important events in the history of America.

The United Kingdom tried its first atomic bomb in Australia. With the success of this trial, the country became the third nuclear power. They were working on his project privately for a long time and later announced their successful trial on the land of Montebello Islands. After the death of her father, Elizabeth II held his chair and became the queen. And, she has been leading the throne to this day. When she took over, she changed a lot of royal rules, the first one being the live telecast of important royal events.

Though not free of controversies, her time in the royal duties has been very smooth. People of England love and respect queen Elizabeth for all the efforts she does for the betterment of their country.

The on-going epidemic of polio killed 3300 people in the US alone. But in the same year of 1952, a vaccine was prepared for it. This vaccine, as opposed to previous versions, was truly effective. Consisting of degenerated particles, it prevented the virus from attacking humans.

It was a breakthrough and saved a lot of lives with very little work. This infection once used to be a major cause of disabilities in children, but this vaccine helped to eradicate the virus once and for all.

The famous romantic ballad You Belong to Me was released in 1952. It was written by Chilton Price, Pee Wee King, and Redd Stuart. It was inspired by a song that portrayed a picture of two separated lovers with one of them stuck at war.

The original song was released during the war, and to remake it, lyrics were changed to remove the war background. The writer made some changes to make it universal. And since then, it is considered to be one of the best romantic songs in the history of the music industry.

This song has to be the best gift that 1952 gave to us. It was a classic jazz theme music and instantly grabbed the attention of the masses. Soon after it was released, it became the number one song everywhere.

For years, it has been the go-to theme song for tango and dances. It has been revived numerous times on different occasions, but the importance of the first one never gets tamed. Blue Tango is still listened to in many places, and it takes back the old fans to their happy times.