Liam Neeson is an extremely popular actor from Northern Ireland. He was born on June 7, 1952, and has had a successful career thus far. He has been part of huge franchises and has played supporting and lead roles in many popular films, making him a known name among movie buffs.

Neeson’s career began in 1976 when he joined the Lyric Players’ Theatre in Belfast. He stayed there for two years and then began appearing in various movies. His first was the Arthurian film Excalibur, which was released in 1981.

The role that brought him fame was his portrayal of Oskar Schindler in Steven Spielberg’s holocaust drama called Schindler’s List. Released in 1993, this movie was a success and made Liam Neeson a sought-after actor.

Due to his roles in many popular movies, he has had a huge impact on pop culture. Many of his movies are classics that are recommended over and over again. Therefore, despite being 70, the work Liam Neeson did in his youth is still alive and enjoyed.

His Impact on Pop Culture

Liam Neeson has significantly impacted popular culture, thanks to his successful career. He has had the chance to be a part of some of the most popular films released, which has made him become a household name.

Furthermore, Liam Neeson’s prominence became even more apparent when he took on mainstream roles that attracted a much larger audience. Thus, he became a staple in the movie industry, and his fame bought him many prizes, accolades, and opportunities. When Liam Neeson was offered to be a part of Schindler’s List by Steven Spielberg, he had already acted in a fair few movies. However, his role as Oskar Schindler in this holocaust film really skyrocketed his popularity.

Schindler’s List is a 1993 historical film based on a 1982 non-fictional novel named Schindler’s Ark. This book, by the Australian novelist Thomas Keneally, impressed Steven Speilberg. Therefore, he took on the story and directed and produced the film. The script, however, was written by Steven Zaillian.

The movie follows a German industrialist, Oskar Schindler, played by Liam Neeson, who saves more than a thousand Polish-Jewish refugees during the time of the holocaust. He does so by employing them in his factory as World War II raged outside.

This movie was released on December 15, 1993, in the United States and was an instant success. People and critics alike had nothing bad to say about the film and could do nothing but praise it for its tone, acting, atmosphere, and how Speilberg directed it.

Therefore, Schindler’s List is an extremely memorable film, which put Liam Neeson in the spotlight and made his impact on pop culture of 1993 quite significant. Liam Neeson was also a part of Les Misrébles, which was an adaption of Victor Hugo’s book by the same name. In this film, Neeson managed to snag a significant role as he played Jean Valjean.

This film was directed by Billie August and included many famous actors of the time, including Uma Thurman, Geoffrey Rush, and Claire Danes. The movie follows the original storyline of the novel as it follows the life of an ex-convict named Jean Valjean, who was paroled after 19 years of hard labor. The reason for his imprisonment is that he once stole bread.

After his release, Jean Valjean, played by Liam Neeson, is pursued by a police inspector called Inspector Javert. The only changes the movie made were that they changed the names of the secondary characters so that they could be easily understood by the English audience it was made for.

Les Misrébles received a positive response, and the critics generally had positive things to say about the movie. Many claimed that it intelligently condensed the massive book without dimming the emotional aspect of it. After starring in hit movies, one after another, Liam Neeson was in high demand. He managed to secure his place as yet another lead character in Rob Roy, a period piece released in 1995. Micheal Caton-Jones directed this film, and Liam Neeson starred as Rob Roy MacGregor.

Neeson’s character was an 18th-century Scottish clan chief. The story follows him as he battles a sadistic nobleman who resides in the Scottish Highlands. Other actors in the film include Tom Roth, Eric Stoltz, Brian Cox, John Hurt, Jessica Lange, and Jason Flemyng.

The film received an overall positive response. People enjoyed the film, and the critics enjoyed the acting, especially Tim Roth’s. Furthermore, the climatic sword fighting scene in the movie is hailed as one of the greatest action sequences in history. Therefore, the film remains memorable and an essential part of pop culture. 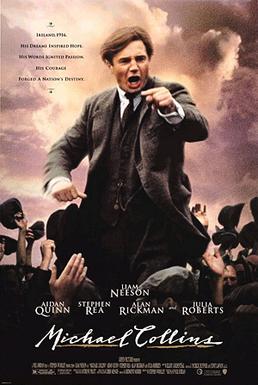 Micheal Collins is another period drama film that stars Liam Neeson as the main character. In this movie, Neeson plays an Irish revolutionary soldier and politician named Micheal Collins. The movie follows him as the leading figure in the early 20th-century struggle for independence by the Irish.

This film, directed by Neil Jordan, was a huge success. It won many awards and was nominated for two Academy awards too. Micheal Collins was a success even in Ireland, where it became the highest-grossing film ever.

Overall, the critics had only positive things to say about the movie. However, some criticized it for not being historically accurate. Liam Neeson was highly praised for his acting, and people remarked his performance to be satisfyingly impactful.

Micheal Collins was nominated in two categories at the Academy Awards, including Best Cinematography and Best Original Dramatic Score. This movie also gained Liam Neeson a Golden Globe nomination for Best Actor in a Motion Picture.

The Golden Globe nomination placed Liam Neeson in the spotlight. Further, it cemented his place as one of the most popular and influential actors. Star Wars is an incredibly popular franchise, and Liam Neeson played a significant role in Star Wars: Episode I – The Phantom Menace. This film is an epic space opera released in 1999 and was written and directed by George Lucas.

In this film, Liam Neeson plays Qui-Gon Jinn, a Jedi Master. This role was prominent, and the director, George Lucas, was adamant about having Neeson on board. To Lucas, Nesson was a master actor, and he hoped that he could be a role model for the other actors, as he possessed the strength that the characters of this movie demanded.

The movie was very well received; some even called it an outstanding media piece. It was by far the most widely anticipated movie of the time. Many praised Neeson for his acting and his role in the film.

Star Wars is a well-loved franchise and is an important part of the 90s pop culture, and no one can deny the impact the movie and the actors have had on the entire world. Another one of Neeson’s popular pieces of media is The Crucible, a play performed in 1953. The Crucible was written by the American playwright Arthur Miller and revolved around the story of the Salem witch trials. The play is partially fictionalized and dramatized to make it more appealing to the public.

The play was performed for the first time at the Martin Beck Theatre on Broadway on January 22, 1953. In the 2002 production, Liam Neeson played John Proctor, the play’s protagonist. He is a local farmer known for his independence and temper, which is a cause of concern for him, his wife, Elizabeth Proctor, and the local authorities.

The play was a success and won many awards, which led to it being adapted as a film. Thus, Neeson’s part in a popular play only solidified him in the industry. Liam Neeson was also a part of the highly popular Love Actually, a Christmas romantic comedy released in 2003. This movie was written and directed by Richard Curtis and followed a large, predominantly British cast.

Among the many story lives weaved into a single movie, Neeson features in one of them as Danial. His character is a widower mourning the death of his wife Joanna, as he is also trying to take care of his stepson Sam.

The movie was a box-office success and grossed $246 million worldwide. It also received a nomination for the Golden Globe Award for Best Motion Picture- Musical or Comedy. This film has lasted the test of time and is popular to this day and is played during Christmas time.

The Chronicles of Narnia: The Lion, The Witch, and The Wardrobe Neeson has also been a part of other staple movies, including The Chronicles of Narnia. In this movie, he voices the lion, Aslan. Chronicles of Narnia was a fantasy film co-written and directed by Andrew Adamson, who based the movie on the novel named The Lion, the Witch, and the Wardrobe.

After its release, the movie became a huge success and ended up grossing more than $745 million worldwide, which made it the third most successful film of 2005. Two more movies were released, which followed the adventures of the characters, and Neeson voiced Aslan in all of them. Another one of Neeson’s top hits includes Five Minutes of Heaven, released in 2009. Oliver Hirschbiegel directed this Irish film, and the script was written by Guy Hibbert. Premiering in January 2009, the film was a success.

Neeson’s acting was highly praised in the film, and it gained him even more prominence than before. He even won the Actor in Lead Role Television Award at the Irish Film and Television Academy Awards.

Liam Neeson has had a career full of popular movies, which has established him as a well-loved character. It is partly thanks to him that the world gets to enjoy movies such as Love, Actually, Star Wars, Five Minutes of Heaven, etc.

Therefore, he is an important part of pop culture and will remain popular as long as his movies are watched and enjoyed.