The aftermath of political turmoil and socio-cultural disruption of the 1960s was the utmost carefree outlook of the 1970s. It seems as if the people of that era were trying to break free from a significant generational trauma through several social and cultural movements, such as the feminist movement.

Overview of this decade might seem to be uproar in broadening the horizons for art and other important cultural aspects. However, deep down, the world was going through a lot of changes. The Vietnam War had ended, and the case of Roe v. Wade had changed the course of history in the US forever. Every era has its own crazy fads such as those based on the musical acts of the 1930s during the depression.

So, all the avid readers interested in knowing what the craziest thing to follow in the 70s was, read on! Nothing aptly explains disco and how it came into being by the most incredible music artists of all time, such as ABBA and Donna Summer, as the 70s era. Disco came with drum machines, catchy lyrics, dance moves, and keyboards and instantly clicked with the masses.

Besides ABBA’s resonating lyrics and Donna Summer’s music, BeeGees was another name that paved the way for disco into the masses in Europe, America, and beyond. Disco was not just music. It was way more than just a genre of music for the 70s people. Disco defined a whole different culture for the fans, entailing those flared bell-bottom pants, giant sunglasses, and feathered hair.

Disco was the most popular theme of any party during that era. Big hit movies like Saturday Night Fever had more than a fair share in promoting disco culture. Another crazy fad that can make you point out the 70s people from the rest was the particular hairstyle that was the fashion statement during that time. African Americans regard the 60s and 70s as their times of fighting for equality throughout the country. They demanded to be treated equally and given all the opportunities that the government had to offer.

One of the fads born in the wake of these non-discrimination movements was that the African Americans let their hair as they were and not straighten them. As a result, an Afro hairstyle or cut became popular, which allowed the hair to grow untampered. If you catch a glimpse of a portrait of a playground from the 1970s, you can easily spot more than one or two kids gliding their way on rollerblades. The 1970s was the most popular time for roller skates as every kid owned it or wanted one.

Though the idea of attaching wheels to one’s shoe was pitched a lot earlier than the 70s, the technology to incorporate such an idea hit the mark during the 70s. Thousands of roller rinks popped open in various cities of the country, and roller skating became a favorite recreational activity and sport.

Another crazy fad of those times was the combination of disco and skating. People loved to skate under the mirror ball and move to the popular disco music of The Sunshine Band or KC around the rinks. Another popular scene from the pop culture of the 1970s was everyone owning an 8-track tape player. Initially introduced as a revolutionary car accessory for the drivers to get rid of the monotonous radio stations that they to listen to while driving, the 8-track tape player became an irresistible fad.

The tape allowed drivers to have their playlist on the go. These tapes were first installed in Ford automobiles only, so they were a status symbol all around. However, a downside of these tapes was the compromised quality of the music; thus, many record labels stopped producing music for a while.

Thanks to the cassette tapes and vinyl records introduced during the late 70s, recovered the music quality. In the 1970s, young women rocked the times with pants called daisy dukes. The character of Daisy Duke inspired these pants in the popular television series called, The Dukes of Hazzard. Catherine Bach played this character in which she was spotted in denim cut-offs that were extremely short and body-fitted. President Nixon introduced another crazy fad of the 70s on returning from a trip to Mainland China. It was the acceptance of acupuncture, an alternate medicine procedure deep-rooted in the Chinese culture. It seemed as if everyone needed acupuncture badly those days or believed strongly in its effectiveness.

Acupuncture advocates that all illnesses have roots in an imbalance in the body’s energy called ch’i. Inserting needles strategically into specific body points that correspond with acupuncture points was the course of treatment followed by many.

This might resonate with you if you have ever felt relieved after cussing or abusing. In the 1970s, all the people were hooked onto Erhard Seminars Training, developed by Warner Erhard. The therapy entailed asking someone to verbally abuse you when you are feeling low. Theoretically, you feel better after someone degrades you.

Initially, these sessions took place in small apartments, but they were also held at expensive hotels once they became popular.

If you thought the Afros and EST Therapy were the craziest trends of the 1970s, you would be shocked upon hearing about the glass eating trend. Yes, you read it right! Tim Rossovich could not resist the glass around him. He gained extensive popularity by eating beer mugs and even light bulbs!

Once he received media attention, his fame spread like wildlife. Marketing agencies called him for doing stunts everywhere. However, as a sophomore at Harvard University, many students started following Rossovich’s suite, and it became deadly. Therefore, the university authorities put a stop to it altogether. It was as if the 1970s was fraught with crazy trends that one could never wrap their heads around. Gary Dahl joked about how he would love a perfect pet that does not need to be potty trained or tamed. During brainstorming, Dahl came up with an ideal pet, a rock!

As it turns out, he was not joking. After two weeks of this discussion with his friends, he penned down the Pet Rock Training Manual in Newsweek. The idea got viral within days, and people were gifting each other rocks and buying them as pets. Dahl made an appearance on the TV and became a millionaire in the nick of time! Another one of the funkiest fads of the 1970s is the popularity of leisure suits. If you meet someone from the 70s, you might be able to dig in a leisure suit in their past belongings. Movies like Charlie’s Angels and Saturday Night Fever contributed nonetheless in making these suits a hit among the masses.

Characterized by dazzling colors, winged collars, and wide pocket pants, these suits were the most popular thing during that time. Even the bands like Bay City Rollers rocked these leisure suits, and then these were found to be everywhere. 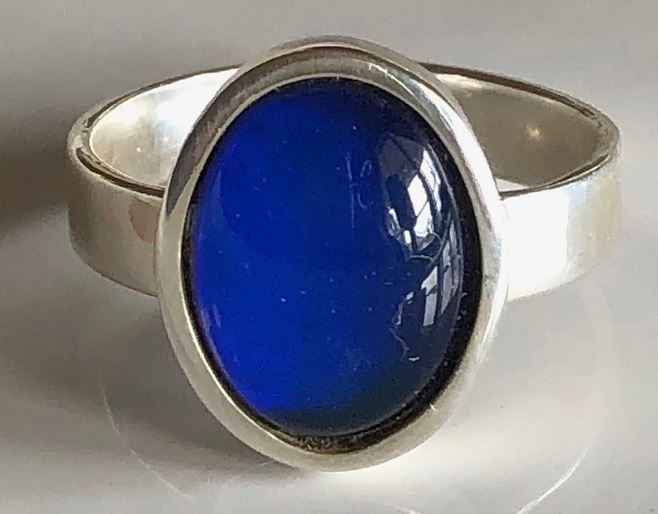 Pitched as an idea to the public by Marvin Wernick in the late 1960s, mood rings became a popular fad in the 1970s. Thanks to Joshua Reynolds, who promoted this idea even though he did not quite believe that a ring crystal could foretell people’s moods.

Mood rings became an instant hit in public in 1975. The crystals would warm up by the wearer’s body heat and cause the face of the ring to change colors. It was a million-dollar product that Reynolds cashed during the 1970s.

Undoubtedly, the 1970s was an era of bold fashion statements reflected via bell-bottoms, leisure suits, and roller skates. People had been in a transition mode, fighting off several obsolete social pressures and amending national laws. The era witnessed a wave of crazy fads that symbolized setting people free from social constraints. From glass eating to mood rings, people were emancipating freedom of choice and living life as they liked.