Each year we get an amazing number of movies, some go super hit, and some go flop. But the 1950s, especially 1959, is considered the best year in terms of hit movies. Many masterpieces were created this year. These movies were not only loved by the people of that specific era but are also watched and enjoyed by the next generations. The actors such as John Wayne, Marilyn Monroe and director like Alfred Hitchcock had shown their best performances in movies.

There are many reasons to prove that the production of the best movies was done in 1959. Including westerns and comedy genres, the films based on French New Wave and Quintessence of Alfred Hitchcock were also made. So, without a doubt, 1959 was the most incredible year of movies of all time. 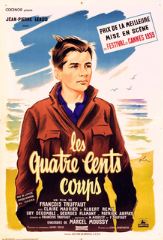 This movie was released on June 3, 1959. Directed by François Truffaut, it featured Jean-Pierre Léaud, Claire Maurier, Albert Rémy, and many more famous artists.

It is a story about a 13-year-old boy and his adventures. This movie is basically based on director François Truffaut’s own life. It will not be wrong to say that the movie’s story is the life struggle of the director to reach this film industry and cinema. It is a beautifully filmed, classic black and white movie. This movie was released on March 29, 1959. The cast included Marilyn Monroe, Joe E. Brown, George Raft, Joan Shawlee, and many other actors who showed the best of their performances. Billy Wilder did the direction of this movie.

This movie is about the two musicians who disguised themselves as women and got into an all-female band because they had to run away from the country. These musicians had seen a mob hit, and they can be badly entangled in the case, which would heavily affect their lives. But things started getting more complicated. It may seem like a serious film, but it is a joyful classic. A complete fun time is guaranteed whenever you watch it. This movie, directed by Alfred Hitchcock, came out on July 1, 1959. The main characters were performed by Cary Grant, Eva Marie Saint, and James Mason. The rest of the supporting actor’s crew also included some outstanding actors like Leo G. Carroll, Jessie Royce Landis, and others.

This movie revolves around a simple ad-man who used to write advertisements but somehow gets involved in a cross-country chase due to some confusion. This chase included the enemy, their spies, the police, and a beautiful woman. It is definitely one of Hitchcock’s greatest movies of all time.

4. Anatomy of a Murderer “Anatomy of a Murderer” was released on July 1, 1959, along-with North by Northwest. This movie was directed by one of the greatest directors of the industry, Otto Preminger. The cast included Lee Remick, James Stewart, Ben Gazzara, George C. Scott, and others.

This one is a profound mystery and crime based movie in which an almost retired Michigan Lawyer takes the case of a man who killed a local landlord because his wife claimed that he raped her. But as the movie proceeds, there are people who have kept some dark secrets, and they start revealing. You can expect that this movie has some exhilarating twists in it. The script was complete top-notch. This one is based on an Indian/Hindi story but was released in the United Kingdom in 1959. It was directed by great Indian director Satyajit Ray, and he did the screenplay too. The characters were performed by Sharmila Tagore, SoumitraChatterjee, and AlokChakravarty.

The movie shows the story of Apurba, nicknamed Apu – a young bachelor who falls in love with a beautiful young woman Aparna. They get married, but Aparna dies young during childbirth. Apu loved his wife so much that he refused to see his child and was devastated by his wife’s death. This movie had a different culture and language, but it got fame not just in India but worldwide. “Floating Weeds” is a Japanese movie released on November 17, 1959. It was directed by YasujirōOzu, and the screenplay was also done by him along with Kogo Noda. The acting team included Kōji Mitsui, MachikoKyō, Ganjirō Nakamura, AyakoWakao, Haruko Sugimura, and others.

This movie is about a Japanese theatre troupe who returns to a small coastal town. The troupe’s head left his son there, who considers the troupe’s head his uncle. So he tries to make amends with his son because of the old times, but the head’s current mistress didn’t want this to happen. This movie had two versions, one was released in 1959, and the other was released in 2018. The first version was released on November 18, 1959, in New York. William Wyler directed this movie. Charlton Heston, Stephen Boyd, HayaHarareet, Jack Hawkins, and others performed different characters. This movie was one of the greatest hits of that time and has won several awards.

Ben-Hur is a drama and adventure-based movie with Charlton Heston as a title character. It was adapted from a novel known as ‘Tale of Christ.’ Usually, Religious movies don’t get too much hype in the industry and the world, but this movie made its own place. People reviewed this movie by saying that Ben-Hur is a sincere concern for Human Beings. This drama and romance based movie came out on January 22, 1959. The legendary Jack Clayton did the direction, and screenplay credit goes to Neil Paterson and Mordecai Richler. The main characters were performed by Laurence Harvey, Simone Signoret, and Heather Sears.

The story revolves around a young man from a low-income family who gets a job in a mill town in Northern England. He dated the daughter of the richest man in town but fell in love with a married woman after some time. He had an intense affair with the married woman, but later in this movie, the married woman commits suicide, and the young man ends up getting married to the girl he used to date, but he doesn’t love her anymore.

The pandemic situation has got everyone into movies and TV shows, and if you are looking for some great movies of all the time, you can watch the top movies of 1959. The above-suggested movies are definitely worth watching if you have great taste in movies.