The famous fictional superhero from Marvel Comics, Captain America, is created by cartoonists Jack Kirby and Joe Simon. In 1941, the character made its first appearance in Captain America Comics #1 from Timely Comics, a predecessor of Marvel Comics. Captain America was originally designed as a patriotic supersoldier who often fought against Nazis and Communists during World War II.

During World War II, Captain America was Timely Comics’ most popular and loved character. When the popularity of superheroes died down after the war period, comic books of Captain America also discontinued in 1950. The character had a short-term “comic” revival in 1953 and returned permanently in 1964. Since then, Captain America got featured in multiple comics, TV shows, movies, songs, and video games.

Before moving ahead, we’d suggest you read about what exactly is pop culture and how it works. Captain America upheld American ideals through cartoons and comic books for 70 years. After that, the character became the first Marvel superhero to make it to the big screen. He has a prominent place among the Avengers(a fictional team of superheroes including Captain America) and is always willing to do whatever it takes for the greater good of the war effort. Over the years, Captain America remarkably shaped popular culture and continues to do so. Let’s learn more about the impact of Captain America on pop culture. In 1940, Joe Simon made the first ever sketch of Captain America and named it “Super American” but changed it to Captain America after thinking there were already too many “supers” around. After some time, the Publisher of Timely Comics, Martin Goodman, assured Simon to publish the solo comic books of Captain America. Creating stories based on one character was hard for Simon but he pulled it off amazingly.

Simon said that Captain America was a politically conscious creation as he and Kirby were disturbed by the actions of Nazi Germany in those years, which led to the involvement of the United State’s involvement in World War II. The two cartoonists felt that war was inevitable and said, “The opponents to the war were all quite well organized. We wanted to have our say too.” As described above, a full year into World War II, Captain America appeared for the first time in comics in 1941 cover of Captain America Comics #1. It showed the character punching Nazi leader Adolf Hitler and sold nearly one million copies. Most people loved the comic, but a few also opposed it, which resulted in the creators receiving a lot of hate mail and threatening letters, mostly from groups hovering outside the offices. These proved extremely serious that Simon and Kirby were personally contacted by the government for support and security.

Before that, the publishing company, M.L.J Magazines, Inc., had featured Captain America in a comic, The Shield,  as a patriotically themed superhero. However, when Captain America became prominent during wartime, people noticed that the character’s triangular shield resembled the chest symbol of its version in The Shield. In response, Goodman asked Kirby and Simon to create a distinctive round shield for issue 2, which later became an iconic part of the character’s outfit.

Along with his sidekick Bucky, Captain America fought with villains from the Empire of Japan, Nazi Germany, and many other wartime enemies of America. American comic book writer, Stan Lee, also contributed to the character in issue#3 in the filler text story “Captain America Foils the Traitor’s Revenge” which showed Captain America using that shield as a throwing weapon. In 1964, Captain America was formally introduced in “The Avengers” which covered his story during the last days of World War II. According to this storyline, he had fallen from an experimental drone into the North Atlantic Ocean and spent decades frozen in a block of ice in a state of suspended animation.

As a leader of that superhero team, Captain America found a new generation of readers. Following the success of multiple Marvel characters in the 1960s, Captain America was recast as a hero, haunted by past memories and trying to adapt to 1960s society. As a part of the aftermath of Marvel Comics’ company-crossover storyline “Civil War,” Steve Rogers ( name of the character of Captain America) was killed in Captain America vol. 5 (March 2007). The storyline of Roger’s return began in issue#600, according to which he was not dead but caroming through time, and returned to the present day in the six-issue miniseries Captain America: Reborn (Sept. 2009 – March 2010).

While Bucky Banes continued adventuring in the comics of Captain America, Steve Rogers acted in a miniseries, Steve Rogers: Super-Soldier, and took on the leadership program in a new ongoing series, Secret Avengers. Spinoff series included Captain America Sentinel of Liberty (Sept. 1998 – Aug. 1999) and Captain America and the Falcon (May 2004 – June 2005).

If you’re a superhero fanatic, read more about the impact of Iron Man on pop culture. 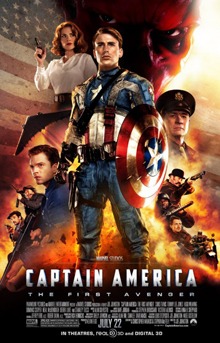 Captain America got featured in a lot of TV programs and films. The first on-screen appearance of the character was in the television serial “Captain America” in 1944. This version of Captain America did not seem to have enhanced abilities but used a handgun without having any qualms about killing criminals. Although the serial came out during the war era, Captain America’s character wasn’t portrayed as a fighter of World War II.

The superhero’s next two appearances were in the movies. These are as follows.

Soon after, Captain America paved its way through the Marvel Cinematics Universe, and Chris Evans portrayed  Steve Rogers in Captain America: The First Avenger (2011). The film bagged $370.6 million at the box office. Other MCU films featuring Captain America are as follows.

The patriotic superhero also graced multiple television shows with his presence. Some of them are as follows.

Captain America also appeared in many Marvel animations, including Iron Man & Captain America: Heroes United, Marvel Rising: Secret Warriors, Lego Marvel Super Heroes – Black Panther: Trouble in Wakanda, and many more. Despite these successful releases, MCU has been in a pickle lately, specifically after the release of Loki in 2021. Read our article about whether the MCU should end already. Captain America is featured in many video games as a leading man or a part of a wide ensemble. Some of them are as follows. Like all other media types, Captain America is also often referenced in many songs. The famous songs that featured the patriotic superhero are as follows. Captain America is an ever-green patriotic superhero of America, and its creators also used the comics to raise funds for the USA during wartime. The superhero didn’t only become the public’s favorite during wartime but was also a success in the post-war era. The renowned protagonist of MCU and Timely’s most popular character, Captain America, is now a global superstar, featuring in multiple graphic novels, comic books, TV shows/films, video games, animations, and music videos.