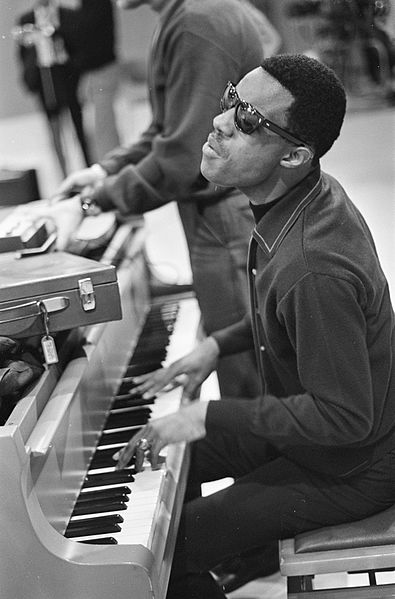 We all know that Stevie Wonder is a legendary musical artist. His music changed the music landscape, and most of us know his songbook and hits. Wonder is often hailed as a genius, and his use of electronic musical instruments like synthesizers in the 1970s reshaped the conventions of R&B, and the whole music landscape as well. He has been credited as a pioneer and influence to musicians and artists of various genres including pop, soul, gospel, rhythm and blues, funk, and jazz.

He set the standard for artist compensation.

In 1961, the 11-year-old Stevland Hardaway Judkins (a.k.a. Little Stevie Wonder) signed his first record deal with Motown Records. He inked his contract with his mom since he was a minor. The two earned a weekly stipend of $2.50 and Wonder’s earnings placed into a trust until he turned 21.

Wonder also received a 2% royalty rate on 90% of sales at the time. What’s more, Motown Records saddled the artist with all recording expenses and recouped the costs before paying the musicians cut. On top of that, Berry Gordy Jr., Motown founder, took another 25 percent of his total earnings for managing his career.

But Wonder turned the tables around when he turned 21. Motown ended up breaking the bank as Wonder broke new ground for what an artist could earn, since the company knew they had to keep him for he’s one of their most promising stars.

In 1971, Wonder independently recorded two albums and signed a new contract with Motown. The 120-page contract was a precedent to the company, giving him a seven-album, seven-year deal with a $13 million upfront pay and a massive royalty hike at 20 percent.

The money gave him a new kind of financial independence, but it was another type of liberty he was seeking. Because of this, artists began to be paid better by their recording studios.

He helped usher in an era where musicians get creative control over their music.

Wonder saw what was going on with Marvin Gaye’s “What’s Going On,” an album released by Motown at the same time his “Where I’m Coming From” was released.

That classic sing almost never was – Gordy hated the tune that would later serve as the title track to one of the greatest and most influential albums of all time. Back then, Gordy felt that the song was too political for radio and would cause Gaye to lose his crossover audience. Gaye responded by going on strike from releasing anything until Motown released the song. He was also able to negotiate a fat contract that would give him a new level of creative control over his music.

But if Gaye opened the door to musicians to be able to actualize their artistic vision, Wonder stomped that thing off its hinges. In addition to gaining a more lucrative financial terms in his 1971 contract, he also gained ownership of his publishing rights and the master tapes of his recordings. More significantly, he and Gaye negotiated for full creative control over his music.

This proved to be crucial, for since he got creative autonomy, his productivity arose. He went on to release five records in five years, each of which is a classic and gained him a spots in the top of the charts.

His albums in his classic period had enduring influence in artists and in the society.

Wonder’s albums during his five-year “classic period” were very influential to the music world. Rolling Stone Record Guide magazine said his albums “pioneered stylistic approaches that helped determine the shape of pop music for the next decade.”

It’s no coincidence that Stevie Wonder’s classic period coincided with earning a newfound creative autonomy. His 1972 album “Music of My Mind,” on which he first attained personal control over his albums’ production, was considered by some as Wonder’s first classic album. Some say it’s his late 1972 album “Talking Book” to be the album in which Wonder “hit his stride.”

Since then, Stevie had the “greatest sustained run of creativity in the history of popular music.” His next albums such as “Innervisions” (1973), “Fulfillingness’ First Finale” (1974), and “Songs in the Key of Life” (1976) all won the Grammy Award for Album of the Year – making him the artist to have the most Album of the Year wins. “Songs in the Key of Life” was the first album from an American musician to debut at No. 1, and stayed on the top for 13 weeks.

“Songs in the Key of Life” was his landmark album – the album where the singer-songwriter is most carefree. It’s widely regarded as the final chapter in his classic period, and it’s considered a classic due to its enduring presence in American consciousness.

Though the album only produced two hit singles, many of its songs managed to achieve immortality. Included are the songs like “I Wish,” which was famously sampled in Will Smith’s “Wild, Wild West”; the smoky strains of “Have a Talk with God”; and his ever-popular ode to his baby daughter “Isn’t She Lovely” – became permanently embedded in the landscape of pop music.

He was on the cutting edge of technology in music.

Wonder was a virtual one-man band, with proficiency in harmonica, keyboard, drums, congas, organ, bongos, melodica, clavinet, and the once frowned-upon synthesizer. He was at the forefront of embracing new technologies in music since the early ‘70s when he began incorporating the use of synth in his works. Back then, his use of synthesizers was criticized, as people didn’t consider it to be a legitimate instrument. But thankfully, times has changed, and Wonder played a leading role at this, encouraging other artists to use electronic music as well.

He didn’t stop at the use of synthesizers, though. He was also an early proponent of drum machines and one of the first artists to use a sampler in his music. His 1979 record, the nature documentary soundtrack album entitled “Stevie Wonder’s Journey Through ‘The Secret Life of Plants’”, was one of the earliest digital recordings ever released. Since then, he has been using computer software programs to record and edit his music – being one of the first artists to do so.

He fought for Martin Luther King’s birthday to become a holiday.

Every third Monday of January, the nation celebrates Martin Luther King Jr. Day, and we have Stevie Wonder to thank for that. After he was signed to Motown at the age of 11 and being named Little Stevie Wonder, he spent his teenage years playing music and touring. At a Chicago rally that he attended when he was 15 years old, he met the Reverend Martin Luther King Jr., and his life was changed.

Three years later, when King was assassinated, Wonder flew to Atlanta to the funeral and took up a decades-long fight to have the nation recognize King’s importance and have his birthday as a national holiday. He paused his music career to spearhead this cause by holding rallies to convince the Congress to pass the bill, which was eventually signed by President Ronald Reagan.

His 1980 single “Happy Birthday” would play an outsize role in the creation of the Martin Luther King Jr. Day, the first national holiday to honor a Black American. Wonder said in 1981, “Why should I be involved in this great cause? As an artist, my purpose is to communicate the message that can better improve the lives of all of us. I’d like to ask all of you just for one moment, if you will, to be silent and just to think and hear in your mind the voice of our Dr. Martin Luther King.”

He was a great philanthropist.

Wonder has made a career in philanthropy, too. With his long career, he reflected his concern with humanitarian issues. He has written, produced and performed songs for charities in support of various causes. He worked on AIDs awareness, fundraising for the blind and disabled children, and in anti-apartheid efforts. He helped in the cause of fighting cancer, diabetes, domestic abuse, and hunger and homelessness.

His activism was pivotal in the US and world events. He served on the President’s Committee on Employment of People with Disabilities, Junior Blind of America, the Children’s Diabetes Foundation, and the creation of the Wonder Vision Awards Program. For more than 10 years, he provided toys for children and families in need with his annual House Full of Toys benefit concert. In 2009, he was named a UN Messenger of Peace by the United Nations. And when Hurricane Katrina struck in 2005, Wonder donated all of the proceeds from “Shelter in the Rain” to relief efforts.