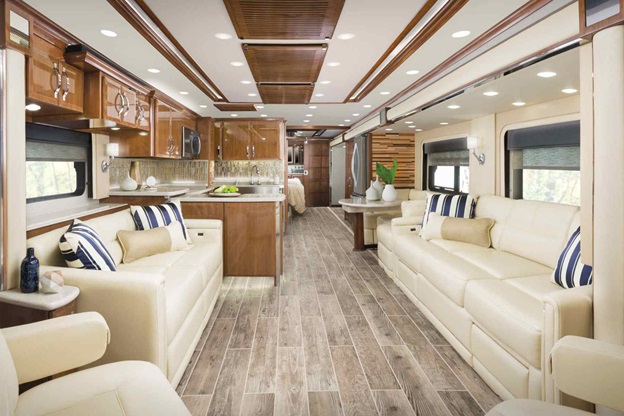 The popularity of travelling by motorhomes attracts not only ordinary people but also celebrities. In fact, even the custom-built RVs similar to those owned by some famous personalities are now available for sale on ZeRVs.

Celebrities have teams of personal assistants, coastal mansions with ocean views and stars on the Hollywood Walk of Fame. But at their cores, celebrities are ordinary humans too. For example, although they can afford to travel by private jet and stay in five-star hotels, many of them still appreciate the art of RVing. In fact, Jeff Daniels, who starred alongside Robin Williams in the 2006 film, RV, has his own YouTube channel featuring webisodes showing how he maintains the RV he drives around Michigan.

Stars seldom stay inside their house. They always found shooting and touring forced them to leave the comfort of luxury mansions and go on the road. Someone likes to stay in hotels, but “hotel life” is not liked by everyone. Therefore, many celebrities choose houses on wheels – residential vans, which are arranged to their liking. The result is the same luxurious moving mansions.

Their trailers are filmed in the show “Star Houses on Wheels”. Presenter Carter Oosterhouse comes to visit the celebrity and shows what their trailers look like from the inside. You can join Carter on Wednesdays at 8 p.m. on Fine Living (available on cable and satellite networks). And we tell you what the houses on wheels of Will Smith, Vin Diesel and Kellie Pickler are. Hollywood superstar Will Smith did not stint on his house on wheels. Although it is unlikely to call home a huge two-story trailer worth 2.5 million dollars. Rather, it’s a real mansion. Smith lives in it during filming and does not want to deny himself anything. In the interior only expensive natural materials: leather, wood, granite.

The bathroom alone cost the actor $25,000. The design is made in noble brown-bronze tones. In the trailer, there was a place for a large dressing room and an impressive wardrobe. Speaking of the dressing room. There is a huge mirror in it and in the mirror, there is a small  TV screen. All so that the actor does not get bored during the lengthy make-up process. But you can watch the movie in another room – on the second floor is a home theatre for 30 spectators. I wonder how often an actor reviews films with his own participation? The hero of the series “Fast and Furious” and the man-dream Vin Diesel does not want to sacrifice comfort on the set of the next movie hit. In his huge two-story van with an area of 100 sqm, the actor feels at home. Diesel spent $1.1 million on the “cottage on wheels” arrangement. For a pleasant life in the trailer, there is everything you need, including state-of-the-art technology: the latest stereos and 3D TVs.

On the top floor there is a study with panoramic windows, and next to it – a playroom for children. The actor does not like to part with the family for a long time: his daughters and son often come to their father for the shooting. Despite his reputation as a “sloppy guy,” Diesel chose quiet colours for the interior: dark brown and beige. The actor did not forget about safety: on the perimeter of the trailer installed panoramic cameras, recording everything that happens around. Country American singer Kellie Pickler called her house on wheels “Fairy.” It turns out that Kelly spent all her childhood in the trailer, so she liked this home. She hates hotels and on tour lives only in an adored van. It has everything the singer needs: a living room, a bedroom, a kitchen, two bathrooms, a mini sauna, a dressing room and a huge wardrobe. Inside the latter lurks a real treasure – a closet with 42 pairs of shoes! From this, any girl will take your breath away! But that’s not all. Kelly took care of her beloved dog: for her, in the trailer, there is a special house, and – a miniature staircase to the bedroom on the second floor. Kelly does not like to part with his pet even at night. As for the design of the Fairy, it is made in light colours. White soft furniture, beige walls and elegant table lamps make the singer feel as snug in the trailer as at home.

Divergent star Shailene Woodley spent 2.5 months last summer living in her parents’ 17-year-old, 30-foot-long motorhome she named Peace Train. The 29-year-old actress was on the road campaigning for Bernie Sanders. At times, she even had famous roommates like Rosario Dawson and Kendrick Sampson. Woodley grew up RVing with her family, so the Divergent and The Fault in Our Stars actress felt right at home—even spending a few nights in Costco and Wal-Mart parking lots. The Peace Train was not really built for VIP people. There are several motorhomes offered at ZeRVs that look similar to that one owned by Woodley’s parents. British powerhouse Simon Cowell, another American Idol alum, has also been spotted living the RV life. In fact, he reportedly borrowed Will Smith’s trailer which prompted him to decide he needed his own trailer from Anderson Mobile Estates. Cowell’s rig, which he lived in while travelling across the U.S. holding The X Factor auditions, has a feature you’ve probably never seen in an RV: a spiral staircase!

To celebrate his 53rd birthday last year, John Stamos rented an RV and took a California road trip with his pal, Drake & Josh actor, Josh Peck. The two famous goofballs shared their shenanigans (singing the Full House theme song, dancing in convenience stores, making a donut run, etc.) on social media where they even used #RVLife. Rumour has it they even made a few stops at KOA! To celebrate their honeymoon, Ashton Kutcher and Mila Kunis also rented an RV and took a California road trip. Their ultimate destination? Yosemite National Park. The two stars of That ‘70s Show embraced the simple lifestyle—even buying their own groceries at Whole Foods and staying in an RV park for $59/night. Their honeymoon was featured on the cover of OK! Magazine who reported they only spent $75/day.

Don’t think that only celebrities can drive an RV. Visit ZeRVs and you can find a lot of big rigs closely similar to the ones owned by the above celebrities. Read more facts about famous actors like Bill Cosby on this post.