The 1980s served as a great year for the computer industry, as well as the music business, as both of them have benefitted from the technological advancements brought by engineers and scientists that wanted to make life more convenient for people. There were not a lot of setbacks in the 80s in the world of technology, as most of the inventions and achievements in the period were still being talked about to this day. Here is a brief timeline of the pivotal moments in technology during the 1980s.

It was in 1980 when Bill Gates, founder of Microsoft, agreed to provide the operating system for IBM’s personal computer, which was going to be released in 1981. The operating system programmed by Microsoft was the PC DOS 1.0 that was modified to be compatible with the IBM Personal Computer by Bob O’Rear, one of the employees at Microsoft.

The year 1980 was also important for the creation of the internet, as it was in the said year that Tim Berners-Lee, who worked as an independent contractor at CERN (European Organization for Nuclear Research), began experimenting on improving the communication between researchers that are far away from each other. What came to be from his experiments was ENQUIRE, a software project that serves as the predecessor for the World Wide Web.

Another interesting invention that was released in the United States in 1980 was the Sony Walkman, although it was already released in Japan on July 1, 1979. The Walkman allowed users to play cassette tapes in a portable player that they can take anywhere. On March 5, 1981, Sinclair Research released the ZX81, the successor to the ZX81, and one of the best-selling British home computers in the world after selling more than 1.5 million units.

It was also in 1981 when the first commercially successful portable computer, the Osborne 1, was released by the Osborne Computer Corporation. The Osborne 1 was developed by Adam Osborne, the founder of the Osborne Computer Corporation, and it costs approximately $1,795 during its launch date (April 3, 1980). Even though it is deemed as a portable computer, it doesn’t have any batteries on it; instead, it can only be powered through an electrical wall socket. However, it did have portable features, like its small keyboard and CPU that can be connected to form a hand-carried case.

The Commodore Business Machines company followed up their PET line in the 70s with the Commodore VIC-20, which was powerful enough to run video games. Speaking of video games, 1980 was the year Pac-Man and Donkey Kong was released by Midway and Nintendo, respectively. Donkey Kong is considered to be Mario’s first appearance in a video game. Unfortunately, there was a drawback in the computer industry in 1982, as it was in that year that the first computer virus was discovered. This virus, named Elk Cloner, was written by Rich Skrenta, a 15-year old high school student at Mt. Lebanon High School in Pittsburgh, Pennsylvania. The Elk Cloner was discovered inside a floppy disk, where it can then infect Apple II home computers.

Additionally, 1982 was the debut year of the compact disc (CD), an optical audio disc that was co-developed by Sony and Philips. The compact disc will eventually overtake vinyl records for the number one platform for music by the end of the 80s. One year after the release of the Apple IIe, the Apple Computer company released the Macintosh personal computer on January 24, 1984. The Macintosh is regarded as the first successful PC to utilize a graphical user interface, and its interface closely resembles the ones that we are currently seeing on our computer screens.

Tetris, the famous tile building and matching game, was also launched in 1984. The video game was designed by Alexey Pajitnov, a video game designer based in Russia. 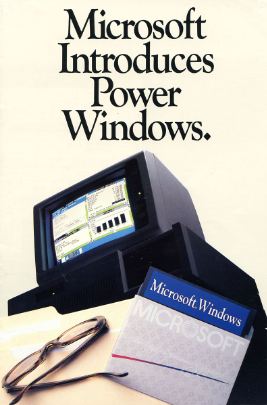 Another important milestone for the internet happened in 1985 when the first commercial domain name was registered in the top-level domain called “.com.” The domain named was “symbolics.com” and was owned by a computer systems firm called Symbolics Inc.

The first MS-DOS virus, nicknamed “Brain,” was discovered in 1986. The Brain virus was written by a computer hobbyist named Amjad Farooq Alvi, who was living in Lahore, Pakistan. Much like the Elk Cloner, the Brain virus can infect an MS-DOS PC through a floppy disk.

Meanwhile, IBM showed its first portable computer called PC Convertible, and it is considered by many to be the first laptop computer. Two years after the release of the Windows 1.0, Microsoft launched the Windows 2.0 on December 9, 1987. The Windows 2.0 was a more user-friendly operating system than the 1.0, but its features were still not enough for it to become popular among computer users and manufacturers.

Along with the Windows 2.0, Microsoft also released the Microsoft Excel in the same year. The Excel aims to make it easier for people to calculate, graph, or compute numbers or data through the software. The Microsoft Excel would soon be bundled with Microsoft Word and Microsoft Powerpoint to launched Microsoft Office of November 19, 1990. On November 17, 1988, the Netherlands became the second country (with the first being the United States) to be connected to the internet. Unfortunately, because of the rising number of users of the internet during that year, the security of the system was often compromised. One of the first viruses that were able to get inside the internet was the Morris worm, which was created by Robert Tappan Morris. The creator did not intend to cause damage to the internet when he was writing the virus, as he only created it to show the flows in the internet’s security. Surely enough, Morris did show the flaws, and because of his virus, those who were in control of the internet implemented stricter security measures on the system.

By 1989, compact discs or CDs were able to dominate the music-selling industry while also overtaking vinyl records as the number one choice for album and single collectors. In the computer industry, IBM was the first company to manufacture a hard drive that contains 1 gigabyte of storage space.